Going Green like New Belgium? Start with a Hike

This is the fourth entry in a blog series about commercial energy efficiency in Buncombe County by Andrew Polich, Lenoir-Rhyne University Master of Sustainability Studies student. View the first, second, and third. 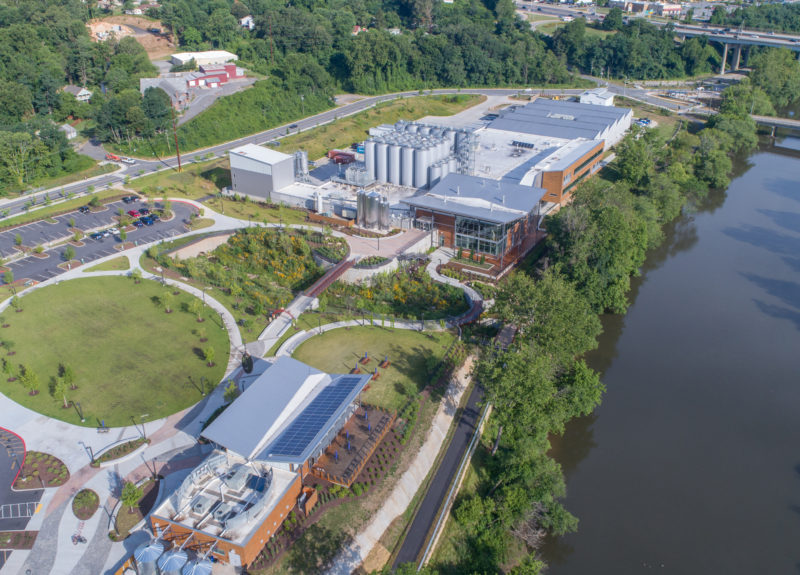 What does it really take to be a green company? Do you need millions in revenue? No. Do you need an army of workers and international recognition? No. I spoke with Sarah Fraser, Sustainability Specialist at New Belgium and her advice–take a hike!

In the early 1990s, New Belgium’s co-founders hiked into Rocky Mountain National Park. They enjoyed some home brews and wrote down their vision for a dream beer company. One of the four core values was environmental stewardship. They were green-geared before anyone knew their name.

Since that time, New Belgium has done a lot for environmental stewardship. In May of 2016, the Asheville campus opened. The lot it now sits on used to be a brownfield polluted by decades of use as cattle stockyards and a junkyard full of scrapped cars. Now, it’s an oasis, home to greenways, permeable parking surfaces, sidewalks, and Penland Creek–a lush gulley that filters stormwater before it enters the French Broad River.

The Asheville campus is also home to energy efficient buildings. The Liquid Center building (above) has a 19-kilowatt photovoltaic (PV) array. They also boast a solar hot water system, which supplies the heat used in New Belgium’s kitchens and restrooms. Because of its solar systems, the Asheville campus has avoided purchasing hundreds of millions of watts (around 230 million for the PV alone = 19,000 watts * 2,694 sunlight hrs/yr * 4.5 yrs). Sarah explained over our call, “The cheapest watt is the one you never have to purchase.”

New Belgium’s 2018 Sustainability Report lays out another part of the vision behind the Asheville campus–it has reduced their shipping distances drastically. Because of their proximity to big, east coast demand, they reduced emissions by 8.5 million pounds of CO2 equivalent in 2017 alone. Energy efficiency in the built environment can be as simple as location, location, location.

As with New Belgium’s founders, Sarah told me that her interest in sustainability was tied to personal experience in the outdoors. During her childhood, she spent summers camping in Great Smoky Mountains National Park. When we spoke, she reminisced about hiking, playing in the creeks, and sitting around the campfire with her parents. For Sarah, the forests were sacred.

In school, she learned about the unfortunate fate of other forests. The mighty Amazon was being cut down for cattle raising and Sarah saw a conflict between business and nature. Her interest in nature only grew and she went on to pursue a Masters of Environmental Sciences. After school, she worked for groups protecting the forests–National Park Service, Nature Conservancy, and Carolina Mountain Land Conservancy.

Then, she had a moment that changed her views on business and the environment. While visiting her brother in Fort Collins, she got to tour the facility of a fledgling beer company, New Belgium. She learned the founders’ concern for the environment and saw that it wasn’t just talk. The company was making big investments in renewable energy and getting ready to launch an entire department dedicated to sustainability.

The visit had a profound impact on Sarah and 18 years later, she would find herself leading New Belgium’s environmental efforts in Asheville. 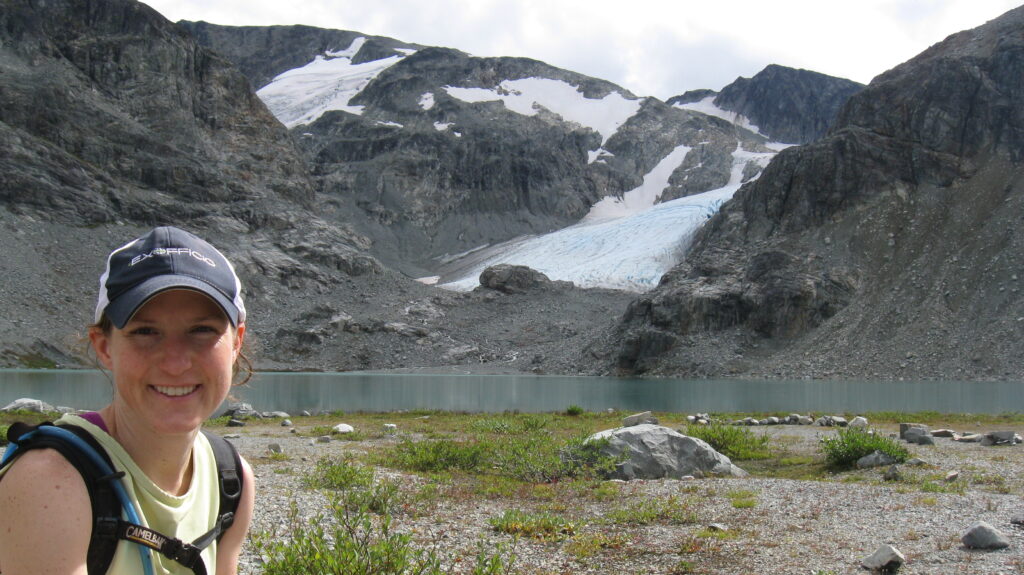 Sarah has always liked spending time in the mountains–they have profoundly influenced her career and lifestyle. Here she is hiking in the Canadian Rockies in 2013.

Maybe your company won’t be as big as New Belgium but it can still be a green hero–the environmental steward our Western North Carolina community needs. Every watt you save helps Buncombe County get closer to its goal of 100% renewable energy by 2042. Remember, New Belgium started with a conversation and a hike.

If you’re a Buncombe County business, Sarah recommends getting in touch with The Blue Horizons Project ([email protected]). Her conversations with Blue Horizons and its Community Council have given her numerous ideas for saving money and the environment through her work at New Belgium. If you’re a brewery, Sarah recommends checking out the Brewers Association, which has a sustainability subcommittee that has developed a series of sustainability manuals to help your brewery save money and energy.